We’ve been home now for over a month. I say ‘home’ but for us as a family right now, this is a vague concept that seems to merely mean not living in a van that moves every few days. At the moment this place of non-moving is my dad’s house, the house that I grew up in. Our presence here is signified by the noise and mountains of life-crud now crammed into his formerly quiet and ordered, if a little eccentric, single pensioner’s life.

My dad has lived in this place since before I was born and has never (to my knowledge) had any plans to go anywhere else. While I have moved my children about almost constantly over the last couple of years, my own childhood home has barely changed. Rob finds it bemusing that we are now taking baths in the very same bathtub I sat in as a teenager; watching our feet resting on the same taps that I rested my feet upon some twenty years ago. I have found it strangely comforting to have Eli and Monty sleeping in the same room I once slept in, containing the same retro wardrobe that I had from infancy, complete with stickers stuck there in my teenage-ery. The carpets are the same and even some of the books on the shelves.

It turns out that I’m grateful for this small slice of stability and, after ten months without seeing each other, my dad and I are enjoying spending some time together. For now.

Colin the van, our home for the majority of last year, is parked nearby looking forlorn. Some of our belongings have been removed and some remain. Like the relics of an abandoned ship, the odd jar or packet left in a cupboard and the scattered books and toys are a reminder of the lives so recently lived there.

At New Year we resigned ourselves to the reality that looking for late-night excitement with children in tow is a vain pursuit and instead took Colin on a final jaunt. Having been constantly sleeping at other people’s houses and surrounded (happily!) by friends and family since we returned, there was much joy at being alone together as a family again with the prospect of pubs with roaring fires, a New Year’s day walk up a hill and of course, being back in our own ‘house’ again. It was, however, all a bit bitter-sweet, as very soon our lovely old van will have to go.

Back in our van, I think about the adventures we’ve had and the friends we’ve made or met; the breathtaking views we’ve watched roll by our plastic windows and the wonder of waking up beside the sea. I think of the meals we’ve cooked and shared with food sourced from the markets and shops of eight different countries. I remember the daft songs we made up and crazy-dancing to Michael Jackson on repeat. I know there are many things I’ll never forget; like the deep peace that settled on me when watching the boys curled up sleeping together through the miles and the months. The sweet, sweaty Mediterranean nights and bleak, freezing France.

I realise that we are van people now and I think that what this means is that if there are times when we don’t have some sort of home on wheels, we will be constantly thinking about when we can get another home on wheels. I suspect that once you’ve tasted the freedom of van travel, it’s hard to settle down to a stationary life. I find myself already dreaming of the next van we’ll get and where in the world it might take us.

Our almost eleven months of travel certainly weren’t always easy, but that was never the point. As almost any traveller will tell you (especially those with children) a mobile life has its downs. Loneliness can be a killer, and there’s just no easy way to deal with weeks and weeks of never speaking in our own language to another soul. Then there was the intense midsummer heat to deal with whilst living in a box made of metal. We couldn’t open the windows because of the mosquitoes so we’d lay damp cloths across the boys’ heads and Rob and I would settle down in bed with teeny little ice packs tucked into our armpits in a desperate attempt to cool down enough to fall asleep. We were bitten relentlessly despite the closed windows and one of my worst moments was Eli crying through the night while I held his arms tight to stop him scratching at bites. It was only as the first light of dawn crept in around the blinds that either of us was able to sleep.

We were plagued too by fly and nit infestations in the South of France, the constant combing of my boy’s voluminous locks (which subsequently led to having to cut it all off), the crazed thrashing at the legions of flying beasts that landed on every surface and the unrelenting heat made me question what we were doing regularly. Add to these worries and trials the uncertainty of not knowing whether we’d find suitable places to stop, the constant packing up and taking down, the various indignities of a tiny toilet in a tiny space that needs emptying every few days and you have a recipe for occasional insanity. 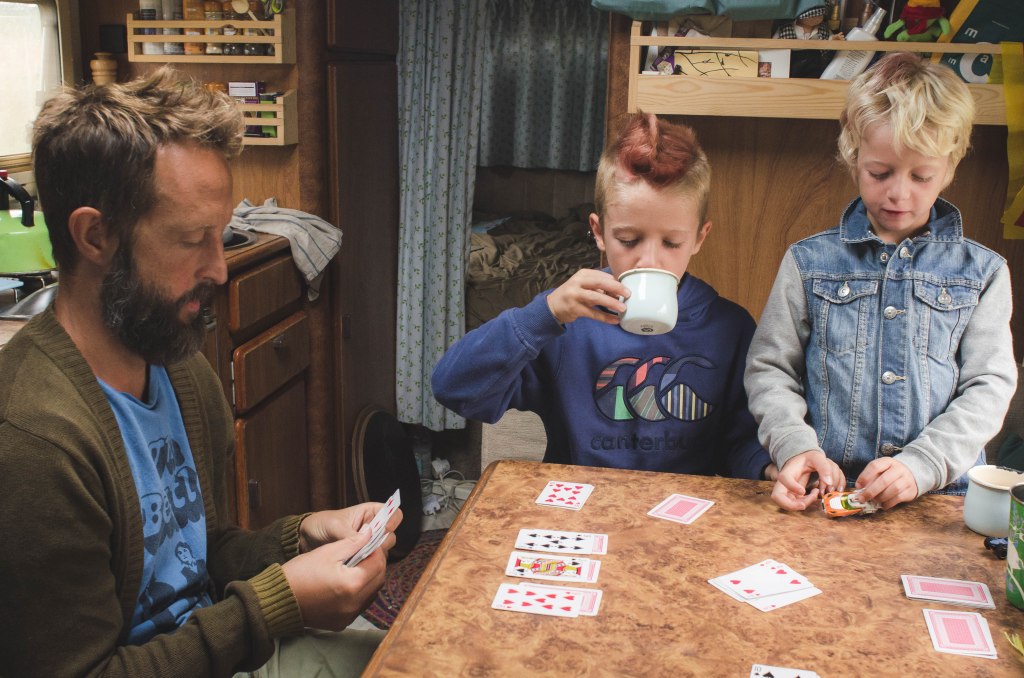 But…Travelling together as a family binds us in unfathomable ways.

There are a million myriad moments of tender togetherness that more than make up for the hardships. It’s difficult to explain the infinite goodness of a life lived literally shoulder to shoulder with your most precious people; falling asleep listening to the soft breathing of the man and boys in my life, waking to hear Eli reading to Monty; huddling together behind those plastic windows while lightning storms of epic scale crash and flash outside and our home shakes ominously. The sound of waves outside our door; card games on rainy days; gentle morning breezes after insufferably stuffy nights; sunlight picking out the familiar shapes of our life together; the smell of brewing coffee stealing into my morning dreams…

Colin will be fixed up and ready for sale very soon, it’s going to be tough to let him go.