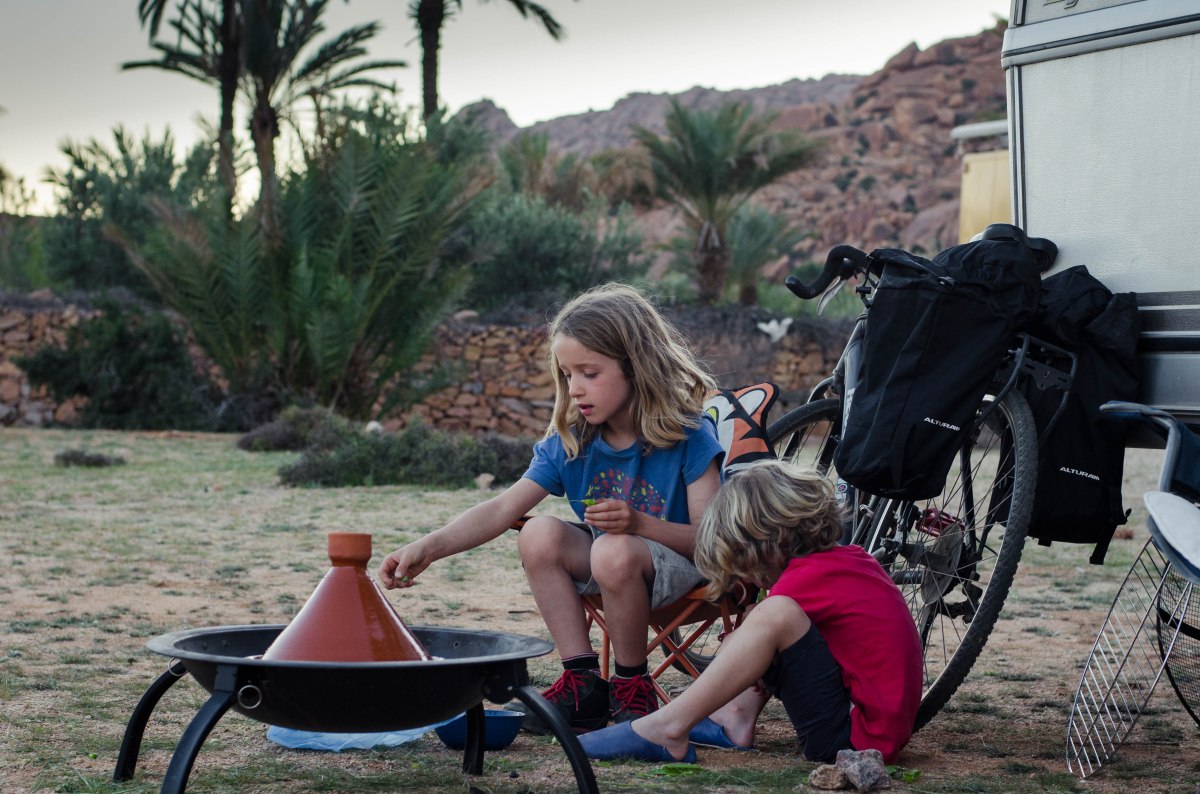 After Essaouira we headed off down the coast with vague ideas of spending some time near the sea before heading to Tafraoute in the south of Morocco. Tafraoute had long been an eagerly anticipated destination for us. It was always to be the most southerly place on our itinerary, the town where we would finally adopt a slower pace of travel. Whilst Morocco dreaming and Google-searching from my kitchen table in Hebden Bridge I’d stumbled across heart-stirring pictures of blossoming almond trees set against arid red landscapes and discovered that every year the town of Tafraoute held a festival to celebrate this transient spectacle. The dates of the festival were hard to determine so we pledged to try and get there for early February in order not to miss it and it was this aim that had kept us moving so quickly. Through the empty, icy nights of central France, the grim downpours of Northern Spain and and the various trials of our first weeks in Morocco, Tafraoute pulled us on.

I think it’s fair to say that I’d started to project some pretty big expectations onto poor unsuspecting Tafraoute. Up until that point in our journey I’d found it hard to settle into our itinerant life. With one eye always on the calendar, I’d been jumpy at the thought of lingering in any of our stopovers for more than a night for fear that we might miss the by now mythical almond festival. I suspect I was hoping to feel more settled or maybe more at home when we got there; putting my faith in the power of this imagined place to confer a comfort that had so far escaped me.

On the way we stopped for a couple of nights at a surfing place called something like Imsoumame (we never did figure out the definitive spelling) and got clean. Our stay at Fertile Roots had transformed our hair into something more like the texture of wire wool and we shamefully delighted in the indulgent amount of water we used while showering. The cliff-top campsite was sparsely populated by a posse of lovely laid-back folk who’d been there for months living their simple surfy life. While we were there the wind blew relentlessly, making awnings flap and sending sand everywhere but the campers softly played their guitars and sat by their campfires unperturbed. These salty haired surfers gave off an aura of quiet contentment as if this windswept, slightly lonely place was somewhere they could feel truly at home. We were still restless souls, being pulled ever onwards and so we left them with their tangled locks and half-peeled-back wetsuits and carried on our way to spend a brief night near Agadir before the mammoth schlep to our ultimate destination.

Our journey was predictably nerve-wracking. Even more than usual, the drive required nerves of steel as we were diverted from the ‘main’ road onto a narrow track that took us up, around and through mountains that had us simultaneously gasping with awe and terror, the approach into Tafraoute is nothing short of epic. Perhaps surprisingly the town itself is comfortably scruffy. There’s no picturesque old medina and its buildings are concrete all the way but there is an assuredness about it; a confidence bordering on indifference that is probably due to the undeniable awesomeness of its location. The mountains surround it on every side, but not so closely that it feels oppressive, and the sun plays games with the surrounding bowl of rock all day long. In the mornings before the sun has made it over the tops of the mountains the rock walls are blue-grey and flat. Then throughout the day they pass through myriad shades and patterns before reaching their finest hour just before the sun dips back behind the lip of rock. At this time they glow deep salmon pink and seem to emanate pure glory.

It’s easy to park for free at Tafraoute due to the huge flat palmeries that are perfect for motorhome wild camping. Here we properly set up camp for the first time since leaving home, putting down rugs purchased in Essaouira, cooking our first tagine on the firebowl, cycling into town to shop at various stalls, recognising familiar faces and making new friends. Ann and Martin had parked next to us and finding a child’s drawing blowing across the sand, Ann had brought it over to find the artist. Twinkly eyed, sun-kissed and – dare I say it – slightly squiffy, Ann emanated good humour. Monty quickly adopted her as a surrogate grandparent and made regular visits to their van where she and Martin would invite him in like an honoured guest. I never saw them once without a smile on their faces and it was with Ann’s encouragement that I sought out the local hammam.

Our interaction with the Moroccan people had been largely limited to the male half of the population. We found that it was the men who worked in the shops and restaurants, men who ran the campsites and drove the taxis that we’d used. The world of the argan nut however seems to belong to the women. Most argan operations advertise themselves as female cooperatives, the women ground the nuts certainly and generally the shops selling the final products are staffed by women. It was one of these shops that I approached to try and get some local knowledge on where to find a good hammam; there were at least a couple in the town but finding them wasn’t as simple as I’d hoped. The shop assistant was a strikingly pretty woman, unusually wearing thick kohl around her black eyes; she had the cheekbones of a younger woman but there was a knowingness around the shoulders that gave her away as middle-aged. After I’d purchased some of the precious oil and with a few paltry French words and much sign language communicated my interest in a hammam, she undertook the task of finding me a bathing place. During our various perambulations, her holding Monty and a reluctant Eli by the hands, we came across her teenaged daughter who took on the job of guide. Eventually we were steered down an unassuming back lane and into a tiled sanctuary overseen by a formidably enthusiastic woman who showed me where to undress and what I would need to bring with me when I returned the next day. My outing that day left me feeling lighter than I had, unexpectedly it was so good to be among other women. We didn’t understand each other’s language but there was something shared.

I returned in the morning with Ann and in the semi darkness of the bathing rooms we scrubbed each other and swapped our stories. Around us the women of the town did the same, paying attention to every inch of their bodies; washing and pouring, washing and pouring. The tiled rooms echoed with the sound of steaming water tumbling into their waiting buckets. I couldn’t help but be moved by the simple care they gave to each other. Young girls scrubbing and stroking older, wearier women; mothers vigorously rubbing their shiny wriggling children. There was no loud chatter, just the constant slosh of water and the occasional low murmur of voices.

In the end it was being among women that helped me find my travelling feet and gave me a chance to rediscover a sense of myself within this wandering, scattered life of ours. They also made me think happily of my own womenfolk. Friends at home, though miles away, felt close that day. I smiled at how much they’d enjoy the intimacy of the hammam and I pondered that our communities might be friendlier places if we all took a lengthy bath together every week. I left and stepped out into the bright sunshine, feeling more at peace than I had for weeks; glowing and content, the mountains golden all around, I walked back home to our van with my new friend by my side.