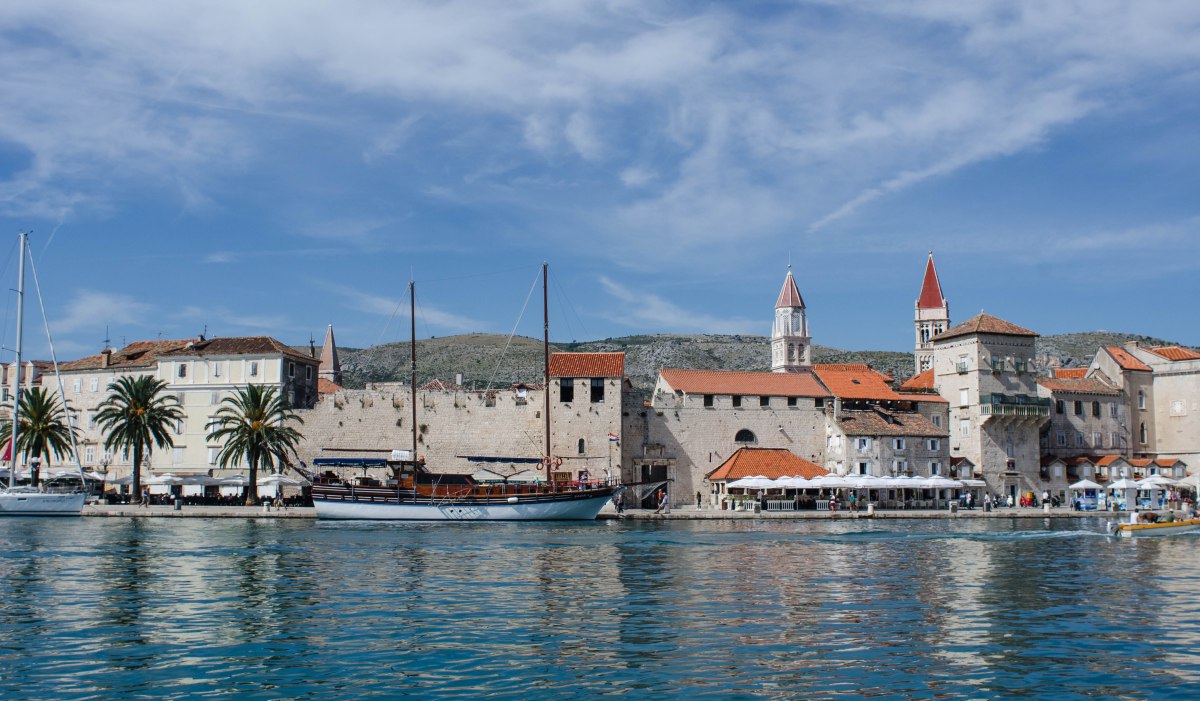 With their mixture of architectural style and layered history, the magnificent cities of the Croatian coast are like film sets. Each turn of a corner and each new vista reminiscent of some half-remembered scene from a movie watched long ago. 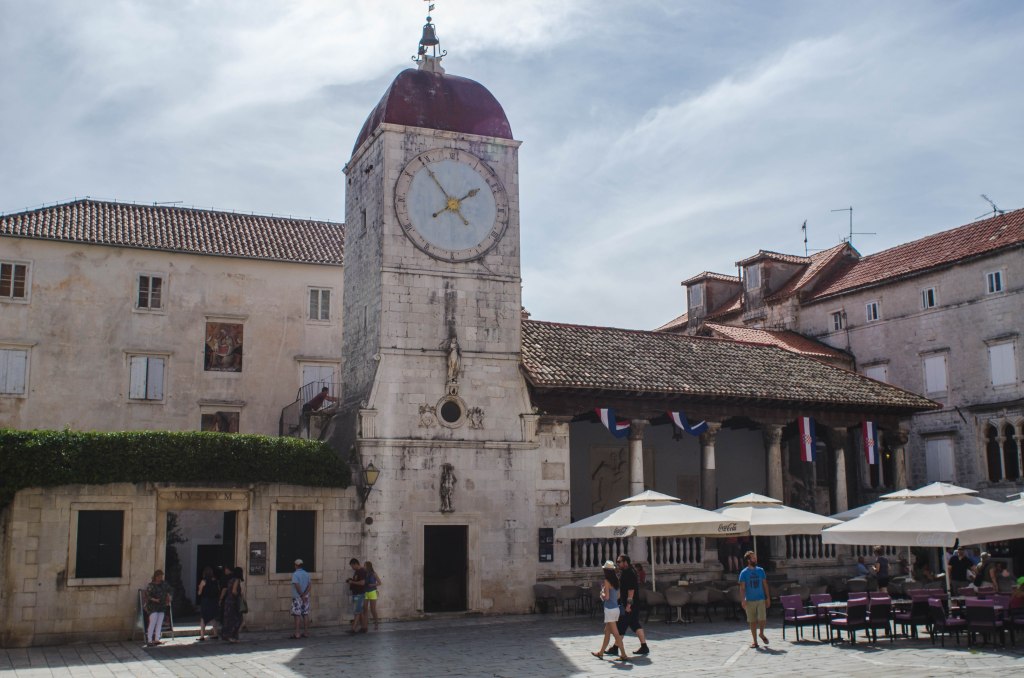 The square at Trogir

Today they feel like tourist towns, their beating hearts muffled by the constant pounding of traveller feet; their stones polished underfoot to a slippery shine by the passage of infinite hordes. Every few paces there’s a cafe, restaurant or souvenir shop, clamouring for your tourist penny. But if you look up, the stories of the buildings still soar above – painted shutters, tiny garret windows looking across endless rust-tiled roofs, carved faces peering eerily from unexpected corners and the exotic moorish curves of Venetian era windows – knowingly watching the garish comings and goings of the modern world below. And if  you escape the crowds and go peeking about the hushed hidden alleyways of the city you can find lines of washing hanging, perfectly mundane against their crumbling backdrop of slow and graceful decay. 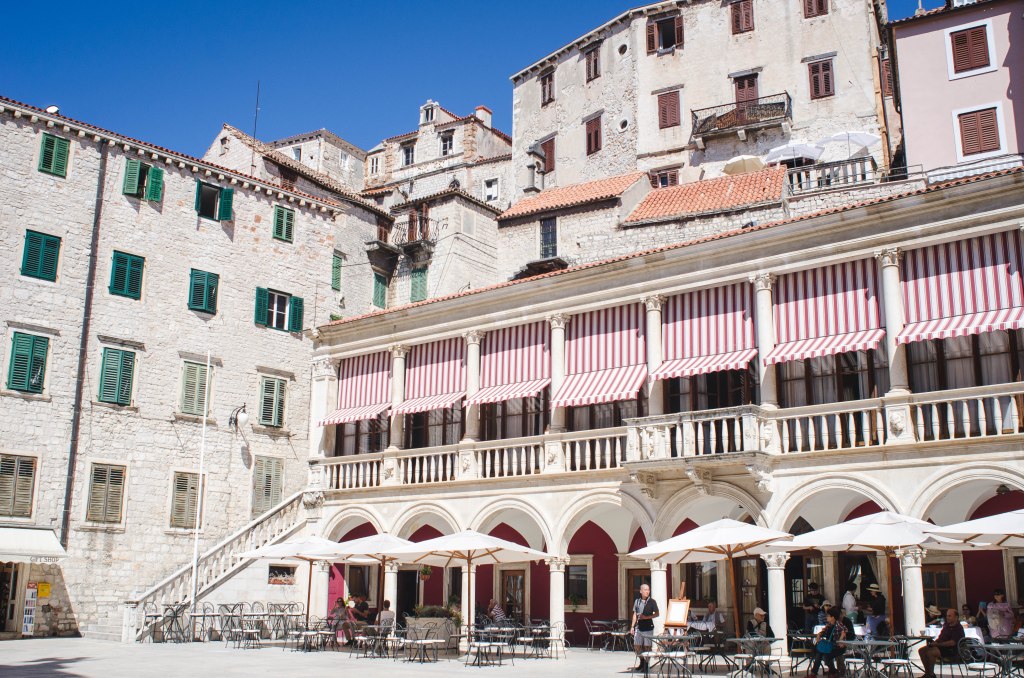 Square near the cathedral, Sibenik 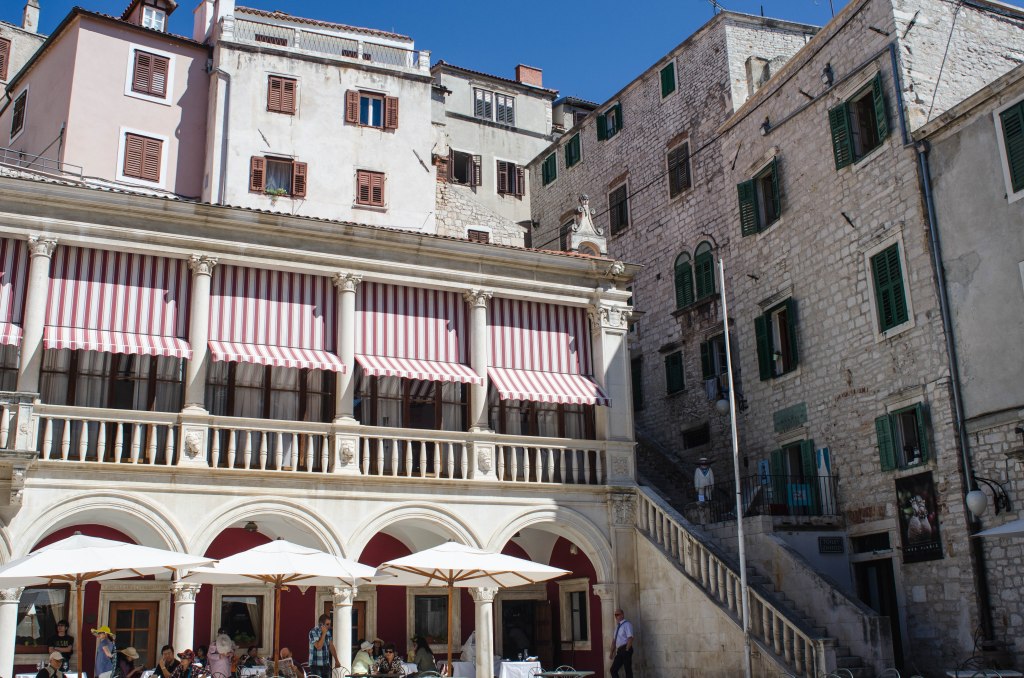 Other side of the square at Sibenik 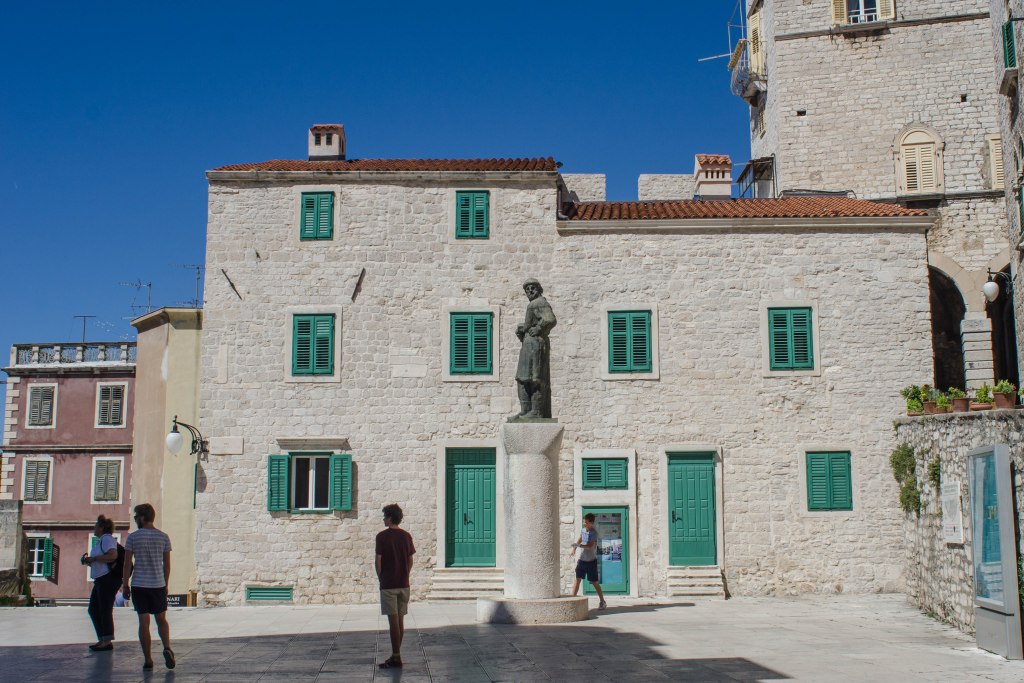 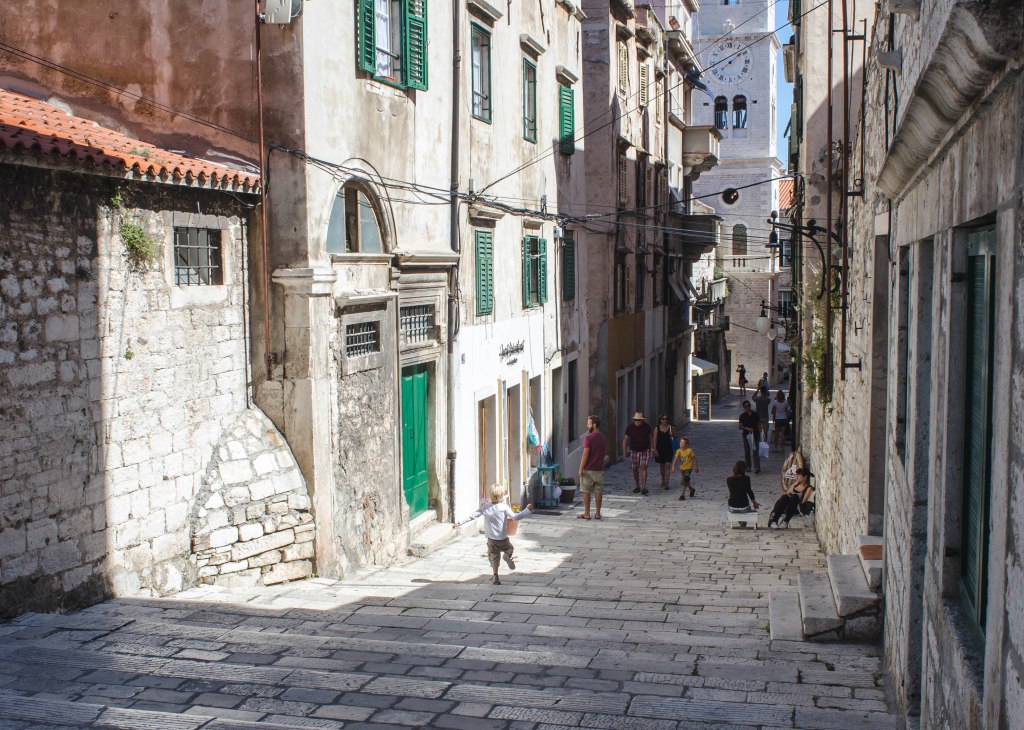 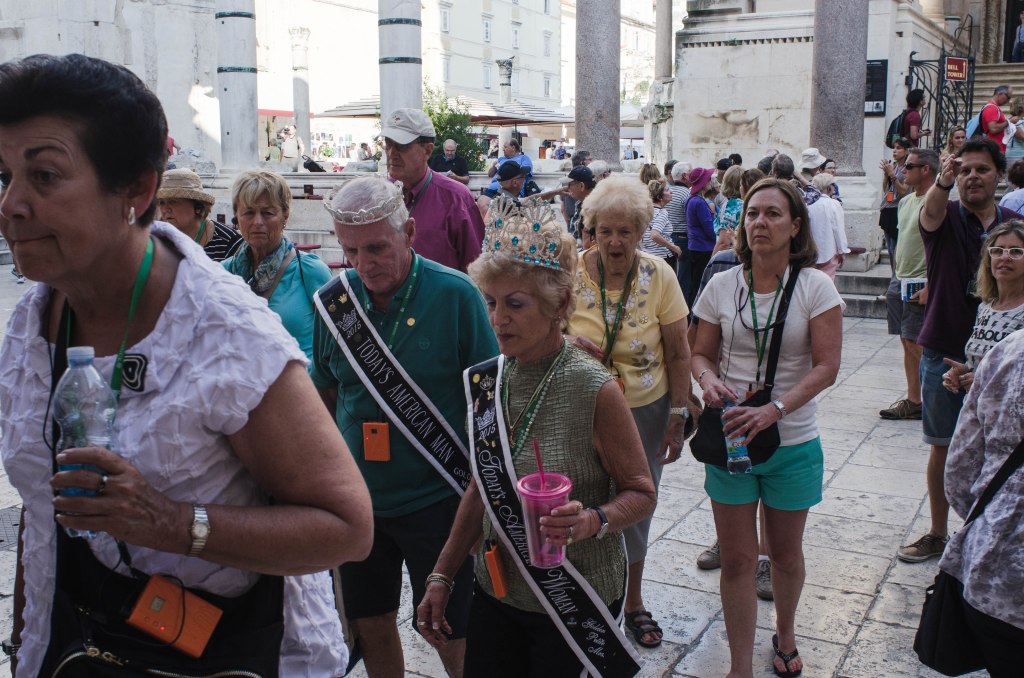 So many influences have shaped the great habitations of the Dalmation coast; Ilyrian, Roman, Venetian, and all those in between. For such a long time these sea cities were like jewels to be coveted, fought over and plundered. Consequently some had towering walls built around them in an effort to keep them whole; the coastal people of Croatia tossed like pebbles on a beach for centuries by each succeeding wave of conqueror. Evetually however, the walls were pulled down and the noble seafronts of Zadar, Trogir, Sibenik and Split nowadays open to the sea with hopeful cheeriness; their ports thronged by enterprising men with little boats, taking visitors on local trips of discovery across clear bright waters.

We were there in the middle of summer and the bright white heat of the sun bounced and echoed relentlessly through the gleaming squares and streets. Rob and I wandered in sweaty awe but did our children appreciate these grand and fascinating places, these ancient civic spaces? Were they tired and hot, did they need ice cream to stay alive?

Did Rob and I think back to a time of travel before children when we might have stayed out all day and dined as the sun went down? Did we remember how it felt back then in the evenings sitting out on Mediterranean streets becoming mellow with wine-loosened conversation, and gentle music? Do we remember how it feels as the heat seeps slowly from the walls and sea breezes finally find their way in from the shore to cool the city’s fevered brow? 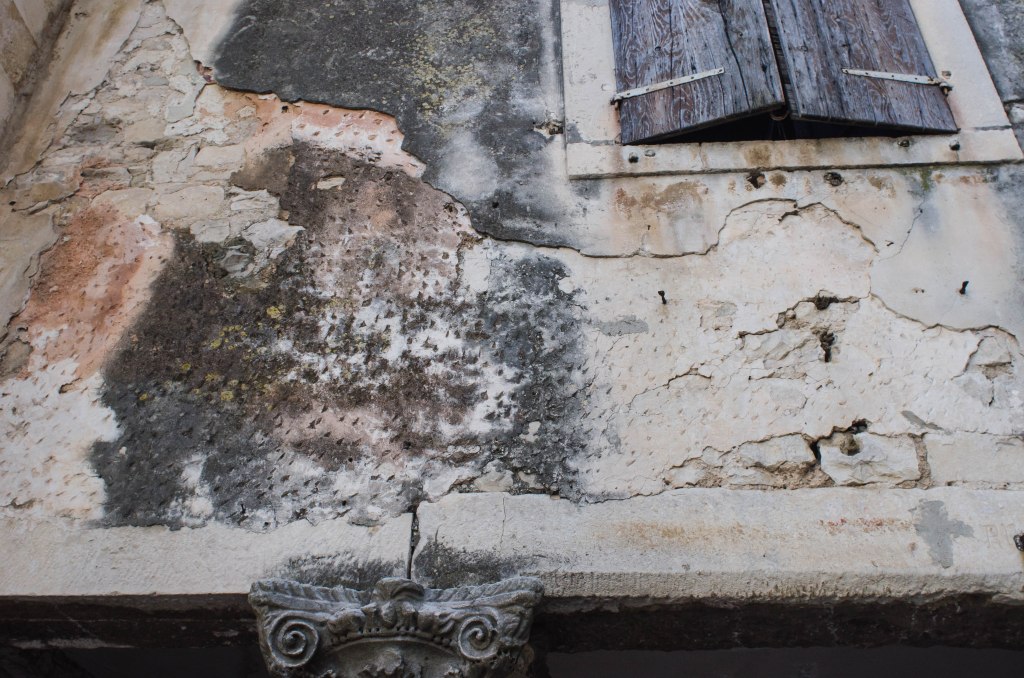 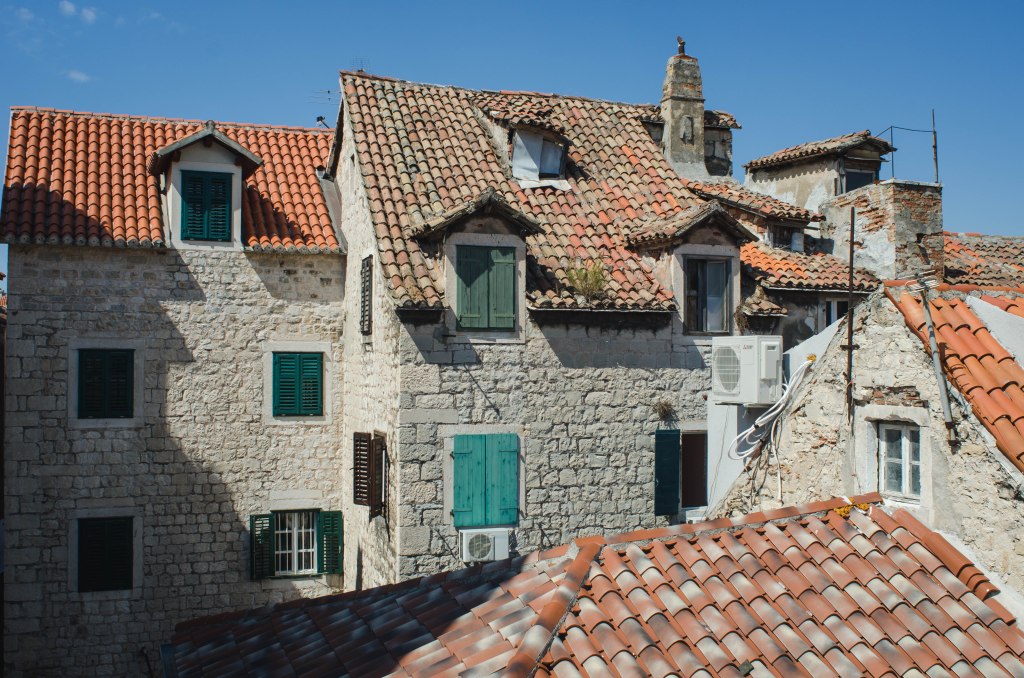 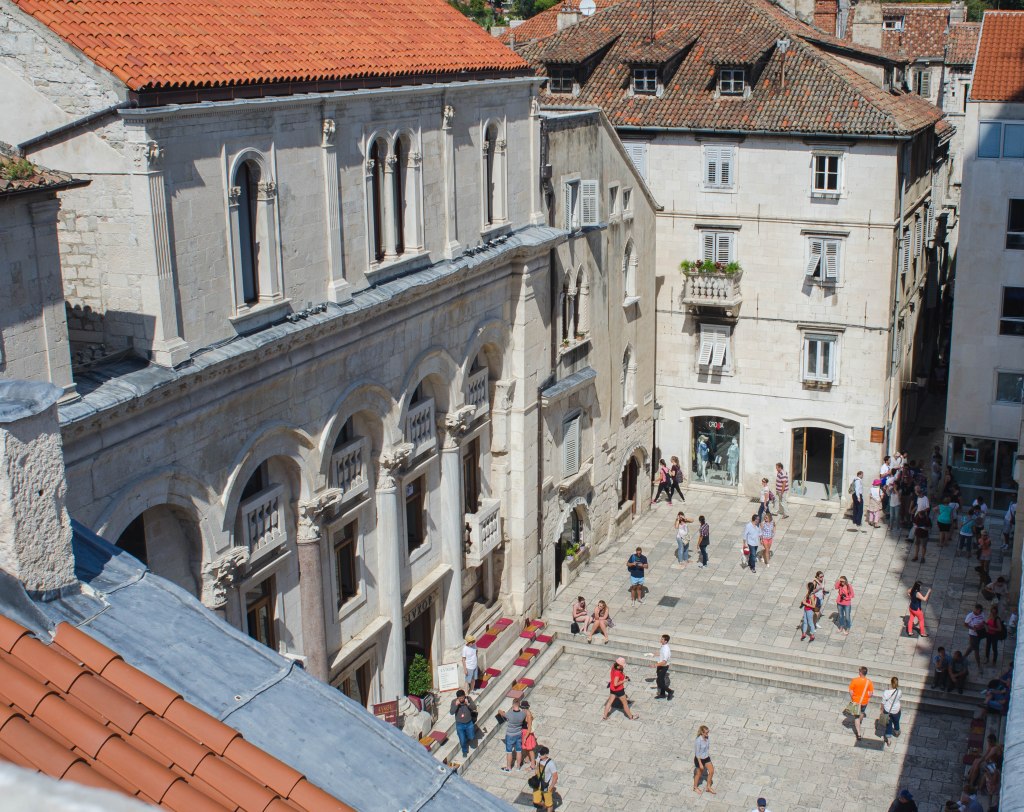 The peristil in front of Diocletian’s Palace, Split 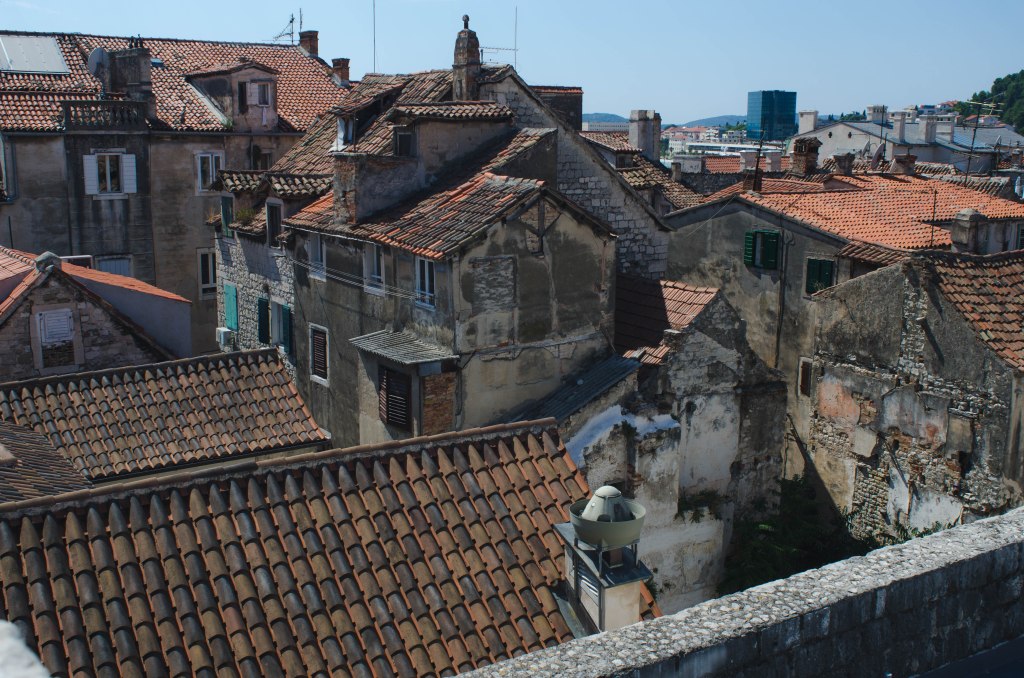 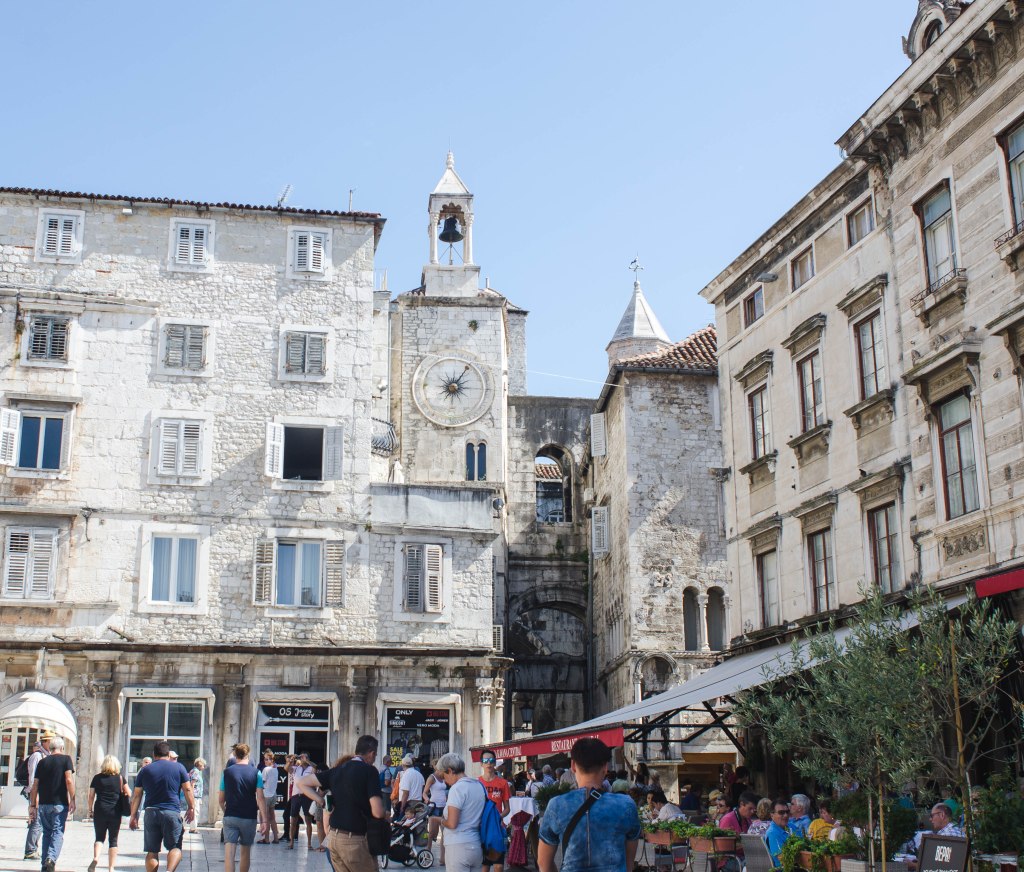 Views of the one of the Iron Gate into the incredible Diocletian’s palace, Split 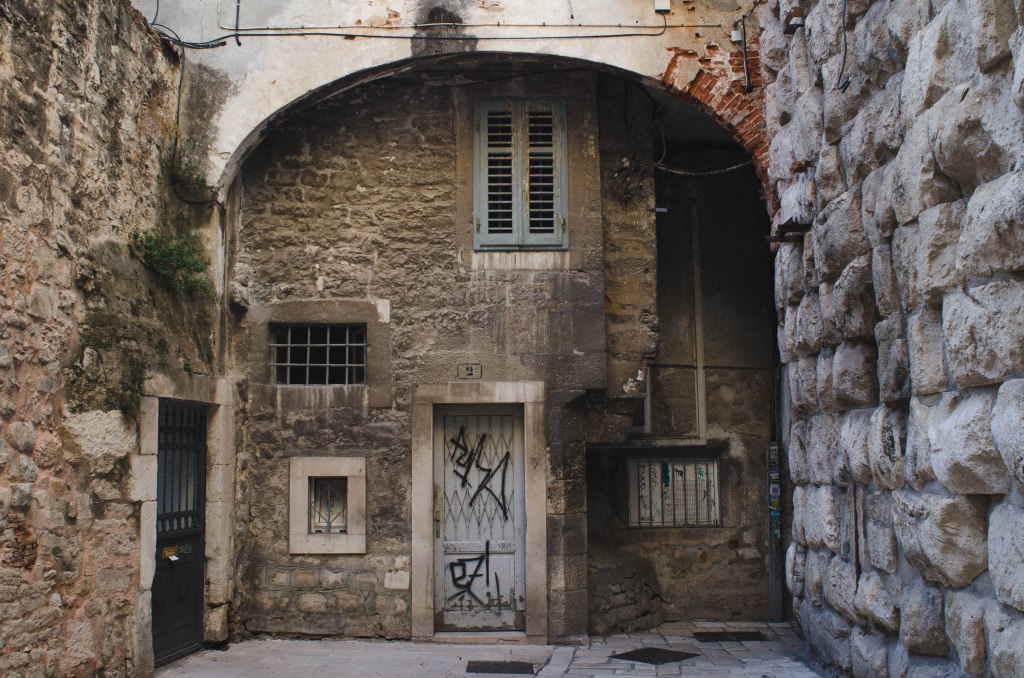 Yes we remembered, as we carryied between us our weary offspring. As we trudged along streets where so many before us had trudged -merchants and sailors, beggars and children, emperors and princes and Today’s American Man and Woman. As we bid our reluctant goodbyes to the domes and the towers, the quaint crooked balconies and worn stairwells; the million intricate details of a million human lives.

*Disclaimer! I’m not sure that Trogir is strictly speaking a city, or in fact whether Sibenik is, but it was giving me too much trouble trying to think about a title that might have said ‘The cities and one town of the Dalmatian coast’ or whatever. Please forgive any inaccuracies – detail is not exactly my forte. If you’d like some better information on the places mentioned here you may find these Lonely Planet pages on Split, Trogir, Zadar and Sibenik helpful.  I’m also aware that I haven’t included Dubrovnik and that’s because it deserves a post of its own I think.